What are all these news reporters and school administrators doing in a Rhode Island College Geography classroom? Monday, September 24, 2012 was most certainly an interesting day in the Mapping Our Changing World (GEOG 201) class.

One of the students in the class, Nic Hardisty, took some of mappings skills that he had learned in Rhode Island College Geography classes and applied them to the local news. Last semester, he learned how to geo-code addresses (basically mapping many different points and addresses) using free online mapping tools. This semester, there had been a rash of bank robberies committed around the Providence metropolitan area, and he created a map on BatchGeo.com of all the known robberies and began searching for patterns.

This was a simple map, but one with striking spatial patterns. 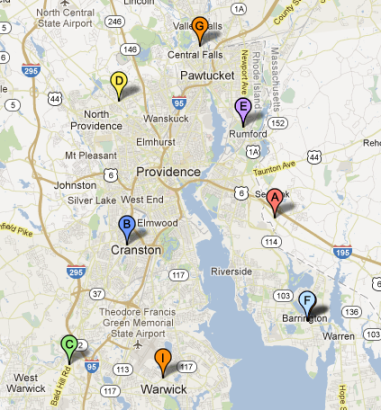 After creating this first map, and noting the spatial characteristics of the particular sites, he mapped out other sites that match the modis operandi of the robber. Most notably these targets were: 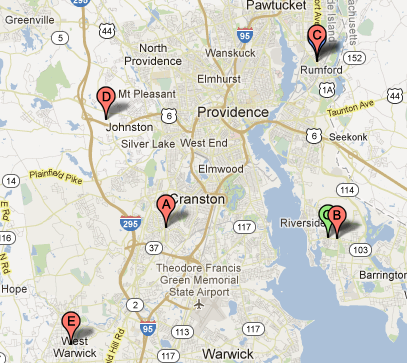 The last point may seem the strangest, but is key to the robber’s presumed strategy. He always escaped on foot according to eye witnesses, but RITE-AID’s are notorious for having poor surveillance systems. The robber then would flee on foot, get in the stolen escape vehicle in the RITE-AID parking lot and escape. In the “predicted robbery sites” map, the 5 potential locations are marked in red, and two further robberies were later mapped in green (within blocks of the actual sites).

Additionally Nic and his team noted a high concentration of car thefts in a nearby Massachusetts neighborhood and alerted the police that finding these vehicles might be the key apprehending the robber (which it was). This information was given to the police and within days, a suspect was apprehended. Considering he left behind no physical evidence at the crimes scenes and was on the loose for months, this swift capture was remarkable. This was not solely caused by, but reasonable to infer that this information served to aid law enforcement. This is the result of a geography student mapping the situation, identifying the spatial patterns and letting the authorities act on this information. Excellent work Nic, proving once again the relevance of spatial thinking and geography education. The applications of geographic knowledge, tools and thinking is truly unlimited.

To publicize this, Nic prepared a presentation for the media, school administrators and his classmates that outlines some of the facts of the case as well as links to the maps he created.

Several local news agencies ran stories on this including: 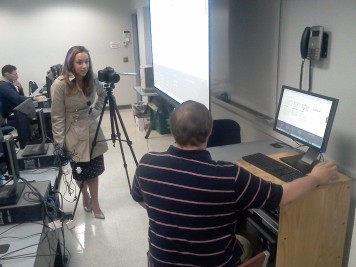