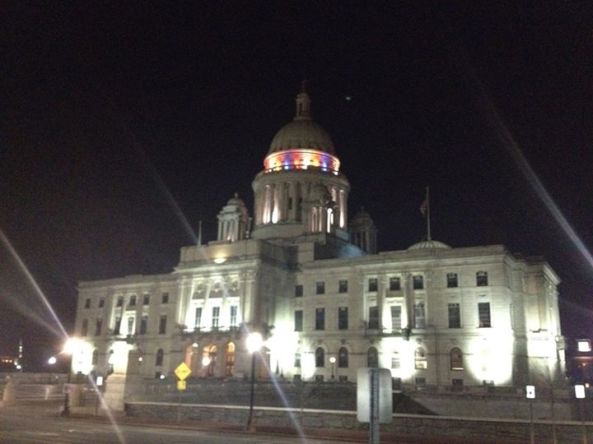 “For most of the world, the Armenian Genocide is the slaughter you know next to nothing about. But every year on April 24, Genocide Remembrance Day, we Armenians remember the injustice of a crime that is rarely acknowledged and often flatly denied. It was April 24, 1915, when the Armenian intellectuals, professionals, editors and religious leaders in Constantinople were rounded up by the Ottoman authorities — and almost all of them executed. During World War I, the Ottoman Empire killed three of every four of its Armenian citizens. The majority of Armenians alive today are descendants of the few survivors.”

Rhode Island is acknowledging and commemorating the genocide committed by the Ottoman Empire against the Armenia people 100 years ago.  The State House Dome is currently illuminated in red, blue, and orange in commemoration of the Centennial of the Armenian Genocide–it will remain lit in these colors until April 24. Many events are happening throughout the state, including one at Rhode Island College, which will host some musical performances on Wednesday.

2.5 million Armenians lived in the Ottoman Empire–1.5 million were killed. Not just killed, but horrifically slaughtered–beheaded, crucified, burned alive in their churches, loaded like cattle onto freight trains and sent to concentration camps, raped, assaulted, sold as slaves, herded into the DerAzor desert and left to die.

The United Nations recognizes the massacres and the systematic destruction of two-thirds of the Armenian population as the first genocide of the 20th century, and has stated that the mishandling of its aftermath set the stage for future genocides, from the Holocaust to Rwanda and Sudan and everything in between. Hitler studied what happened and borrowed many of the Ottoman Empire’s techniques to use against the Jews.

And even though some countries in the world recognize and agree with the UN assessment of the fact, Turkey denies it, and the US still stands silent and refuses to officially state that what happened was genocide…because to do so would offend Turkey, and Turkey is a US political ally.  Many are calling on Israel, a country founded in large part because of a genocide, to acknowledge the first genocide of the 20th century.

Learn about genocide and teach genocide–what causes it, what perpetuates it, what the cost of denial can be. Don’t remain silent. Be a peaceful person in your own life, and in all your relations with others–and speak up about any wrong or injustice.

*Most of this post is courtesy of Janet Rith-Najarian, professional geographer and member of the Minnesota Alliance for Geographic Education.