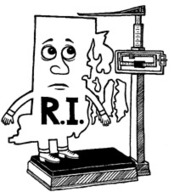 “In the end, the massive wildfires in Southern California burned an area that many reports described as about the size of Rhode Island. Now, that’s probably a phrase you’ve heard before. As the smallest U.S. state, Rhode Island has the distinction—or perhaps the misfortune—of being one of the news media’s most convenient geographic yardstick.  As in, Hey! This think is so big, is’t as big as a whole state!  Just how big is Rhode Island anyway?”

Did you know that Europe’s six smallest countries could fit inside Rhode Island, with room to spare?  This Slate article (as well as this article from the Wall Street Journal) shares some fun facts about Rhode Island’s size as a benchmark for comparisons that hopefully will bolster our mental maps with a familiar, local  point of reference.