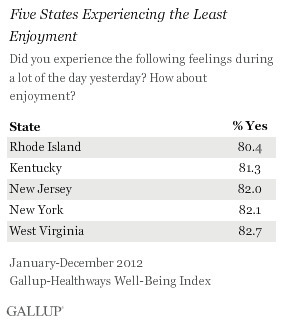 “For the past five years, Hawaii has consistently ranked as the least stressed state, while West Virginia, Kentucky, and Utah have been among the most stressed states. Despite this, Utah residents join Hawaii residents in reporting among the highest levels of enjoyment in the U.S., while West Virginia and Kentucky residents report some of the lowest levels of enjoyment.  While the relationship between stress and enjoyment is not clear, states with the highest stress levels tend to report less daily enjoyment.”

In addition to being the state with the least joy, Rhode Island is ranked as the 2nd most stressed out state.  What are some factors that may account for this regional variation?  What explains Rhode Island’s relative levels of stress and enjoyment?