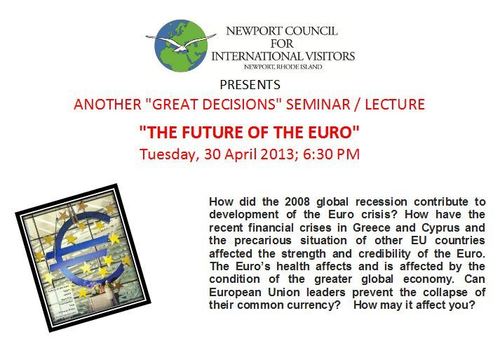 How did the 2008 global recession contribute to the development of the Euro crisis?  This is the question that will be discussed in a lecture sponsored by the Newport Council for International Visitors on April 30th at 6:30pm.  For more information, see this flyer.

This first-of-its-kind meeting brings Rhode Island professional users of GIS and geo-tech together with teachers using the same technology in the classroom. Join us for a look into the future of geospatial technologies in RI and potential collaborations to bring GIS, mapping and geographic skills to our classrooms.  This will be a joint meeting of RI Geographic Information Systems user group (RIGIS ) and the RI Geographic Educators Alliance (RIGEA).
Location and parking: Rhode Island College (600 Mount Pleasant Ave, Providence, RI 02908) “Faculty Dining Room South” of the Donovan Dining Center (Building #41 on the campus map).

Mimi Stevens shows us how and why Brown’s Choices Program incorporates geo-literacy and geographic thinking in its renowned history curriculum units. We’ll see how geographic skills can enhance your classroom experience in any subject area or grade level. We’ll follow the presentation with a charette-style discussion of opportunities and challenges for expanded use of geospatial technologies and geographic content and skills in the K-12 classroom.
Location and parking
Save the Bay Center, (100 Save the Bay Drive, Providence, RI 02905) Large training room.
Free parking at the Center

PDF announcement of the April  22nd and 29th Meetings

The image above is a climograph of Providence, RI and the link provides the raw data about Providence’s climate.  Climographs chart the monthly temperature and rainfall data and are a useful tool is studying climatology.  Here are links to dozens of selected United States and International cities that come from the National Drought Mitigation Center.

This is a clip from the TV show West Wing (Season 2-Episode 16) where cartography plays a key role in the plot.  In this episode the fictitious (but still on Facebook) group named “the Organization of Cartographers for Social Justice” is campaigning to have the President officially endorse the Gall-Peters Projection in schools and denounce the Mercator projection.  The argument being that children will grow up thinking some places are not as important because they are minimized by the map projection.

As Salvatore Natoli (a leader in geography education) was quoted in the video clip: “In our society we unconsciously equate size with importance and even power.” This is one reason why many people have underestimated the true size of Africa relative to places that they view as more important or more powerful. 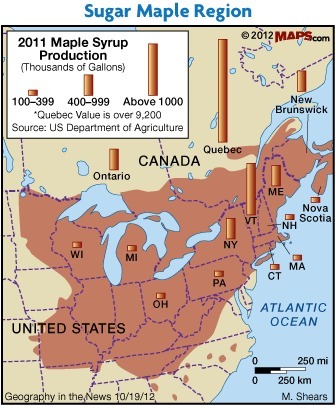 March and April are key months for harvesting sap from trees, making this sugar time in New England.  New England’s climate and biogeography make this the right time because the because the combination of freezing nights and warm spring days gets the sap in the native species of maple trees to flow.  The sap get boiled down to syrup, but did you know that it takes roughly 40 gallons of sap that to get 1 gallon of pure maple syrup?